Every year St. Christopher's Episcopal Church holds a Christmas Eve service for families. This year it will be at 4pm on Dec. 24th. At this service, children act out the story of Jesus' birth. 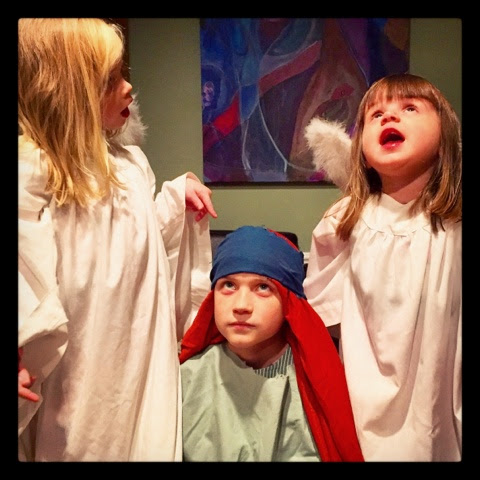 As long as we have had children, we have participated in this service. Michael, our oldest, usually is a shepherd. His younger sisters are usually sheep. Last year Allie and Caroline insisted on wearing hot pink tutus with their sheep costumes. With a 20 month-old and a 3 year-old sheep, it was good to have a shepherd who is used to herding young sheep. Michael did a great job making sure Allie and Caroline stayed corralled in the right places and got home safely to our pew. He has a lot of experience helping us guide those two girls. 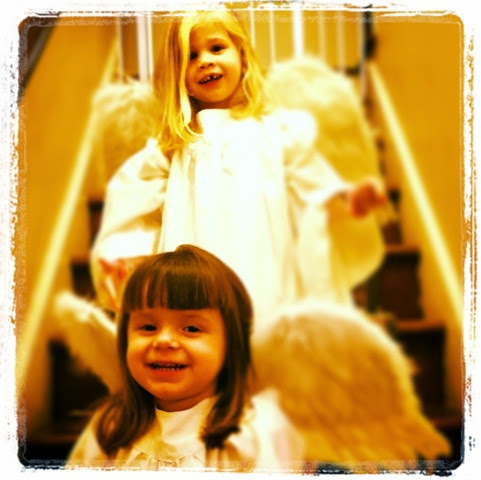 This year, his sisters have been elevated to a new role. They are going to be angels announcing the birth of the Christchild. Sudden outbursts and joyful exuberance that may strike fear into the hearts of shepherds is kind of their pace right now. 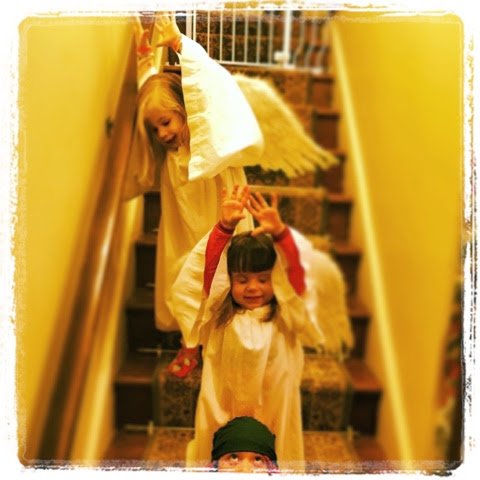 As I was painting my Guardian angels in the studio this week, I could not help but chuckle thinking about my angels in these new roles. Poor Michael. He spent the last few years helping his little sisters. Now they have been promoted to the roles of telling him where to go and what to do!  Michael is getting practice with this at home from them this year as well. 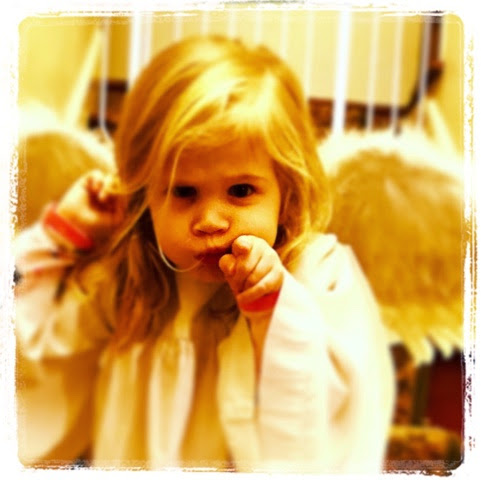 We brought the costumes home and Patrice has been making a few alterations on the sewing machine. Enjoy this silly photo shoot as a little gift. It should be quiet a service with lively actors like these! 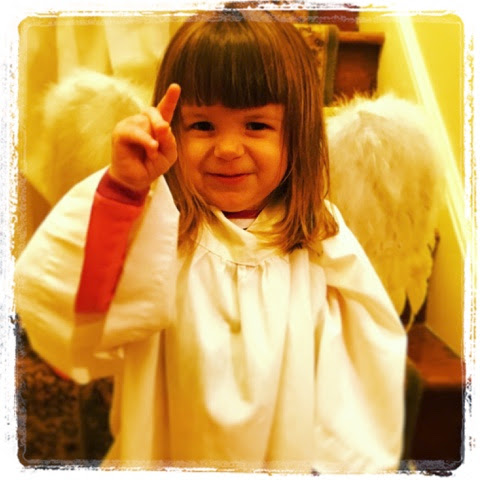 May the joy of Christmas and a message of hope find a place in your heart this season. Peace on the Earth! Goodwill to all people! 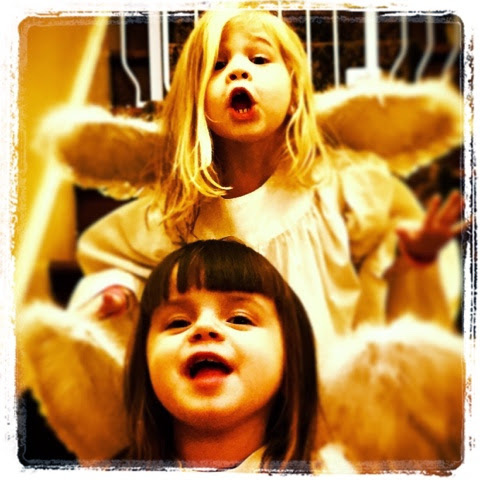 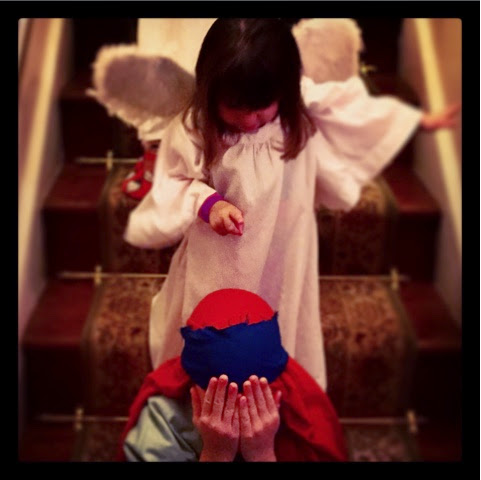 Thank you for all of your continued encouragement and support!
Kris Neely 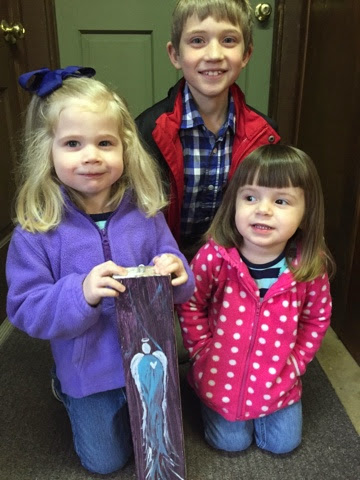 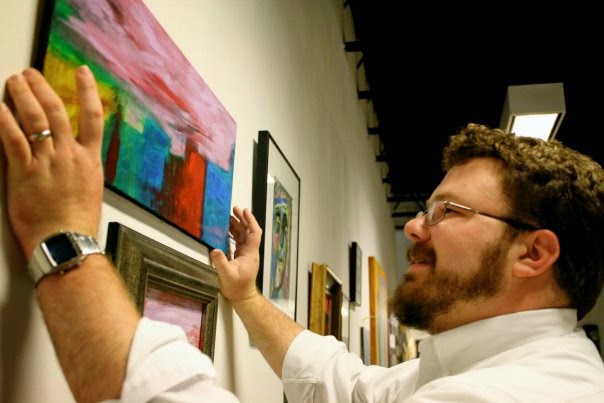 Kris will be at Wet Paint this Saturday, Dec 20th from noon to 7pm
and December 24th from 10am-2pm. 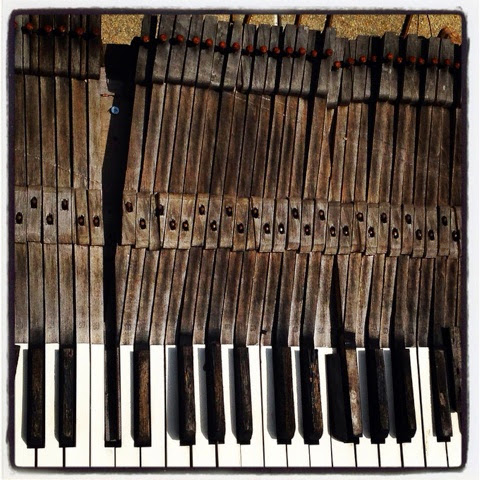 Article on Iconic in Wofford's Old Gold and Black


KRIS NEELY’S ICONIC ART EXHIBIT —
Rosie the Riveter stares down the Guy Fawkes mask in the Chapman Gallery in the Campus Life building. Located at opposite ends of the hallway, the two pieces mark the end and beginning of Kris Neely’s art exhibit, titled Iconic.
“I hope it serves as an invitation for students to consider making studio art part of their liberal arts experience,” Neely says.
Neely is an assistant professor and coordinator of Wofford’s studio art department. He also owns and directs Wet Paint Syndrome, a professional art studio in Spartanburg.
“I think it’s important for students to see me working, to engage in my work and in my process,” says Neely.
The exhibit features pop culture icons such as Martha Stewart and Elvis Presley as well as famous figures such as Martin Luther King Jr. and artist Shepard Fairey. Some of their images are fractured and torn. An interactive piece opens to re- veal Britney Spears. Across the hallway and to the left is a colorful image of Jesus Christ.
Neely juxtaposes these famous faces with photographs of nameless people. Neely points to three images of an unnamed woman who appears in a fashion magazine.
“It’s almost as if the person is not important. So what I’ve done is to try to do a treatment here that might cause us to look more at the human aspect of it rather than just the fashion aspect of it,” Neely says.
Of Rosie the Riveter, Neely says: “That image became the face of a lot of working women who were the reason why the United States could be successful in World War II. And yet, this is the face you remember, not necessarily the faces of the individual riveters.”
Neely’s artwork often snatches inspiration from people in his own life. A series of mechanic’s trays painted with an ambiguous silhouette belonged to a real mechanic. After he passed away, his wife asked Neely to use the trays, all of which were handmade, in his work. Other pieces represent a more personal relationship to Neely.
The cover piece for the exhibit is one of Neely’s signature guardian angles. The original piece was painted in memory of his deceased brother on a piece of found wood.
“My mom wanted something to remind her to be hopeful,” Neely says.
Now, he’s painted over ten thousand of these guardian angels.
“It was taking on a life of its own,” Neely says, recalling how requests for his guardian angels snowballed.
The cover piece, already sold, is displayed outside of the gallery space.
“I decided to break through what is traditionally the boundaries of this gallery space. The idea is that this show is sort of beyond the gallery,” says Neely. “What is art that goes in a gallery? What is art that doesn’t go in a gallery?”
The piece, titled Guardian on Abandoned Canvas is symmetrically aligned with another piece, titled Guardian on Discarded Sign. The latter features the literal word, guardian, printed on an old Dr. Pepper sign. “I think people tend to appreciate when artists can make fun of themselves. It does have a little bit of significance to me because my older brother’s favorite beverage was Dr. Pepper. So I think of that as a tribute to my brother Erik in a way, that I’ve created this 10,000 angels later,” says Neely.
The exhibit will remain in the Chapman Gallery until Oct. 15.
“There’s a tremendous value for us to have the opportunity to look at a body of work, up close and personal. Not just photographs of the work, but to see the physical work the way it’s presented, and for us to question that and have dialogue,” Neely says.
“We need to have places where students can engage with art, where it’s accessible to them,” he adds.

My brother Scott offered this review of Iconic. I am honored to have his eye on the show. 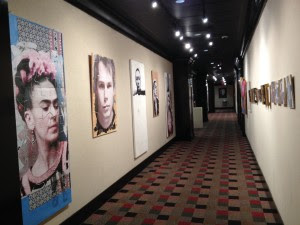 Not only to see, but to encounter.

In the theology of the icon in Orthodox Christian tradition, one beholds a holy image not solely for the sake of moral or spiritual education. The icon is understood as a channel, a door, through which one looks into a sacred dimension, and by which one may encounter the sacred coming into our world from that other place. This communication, between our world and another, is more than a passage of the spiritual through a material work of art. The icon is an incarnation, the fulfillment of the physical and human through the presence of the divine in it.

In “Iconic”, artist Kris Neely gathers multiple artistic and cultural traditions to create sarcastic, splintered, holy images in which the sacred stands among us.

But Neely has entered into his images, tearing them apart and reassembling them to create innumerable fractures in these beautiful and compelling faces. Painted, marked, nailed, assembled, layered on actual doors, raw plywood, found material, and discarded paintings by friends and colleagues, the works are massive collages. Built from multiple sources and orchestrated by Neely, the works express the collective foundation of famous imagery. But they are far more. Intimate, vulnerable gestures characterize the images he has chosen, and his work of tearing, organizing, cutting, trimming, and painting enhances the sense of fragility in these large pieces. A spirit of care and veneration pervades the work. But too, a sense of the ridiculous–of both scale and subject matter–balances the risk of too much religious piety or social critique, and has the effect of disarming the viewer and enhancing the seriousness of the encounter with these powerful, broken, watching people.

To push this sobering humor even further, Neely has placed opposite the large works a wall of miniatures. Composed of salvaged photographs of unnamed people, small assemblages of faceless silhouettes on machine hardware, and burning portraits of both too-famous and violently-marginalized artists, these pieces speak of the beauty and ridiculousness of us all, and the terrible power ignored in each of us when we do not achieve success by other’s standards. There is a violence in these pictures. In contrast to their large, pop-art siblings opposite them, these smaller works bear the traces of a probing German tradition of painting in which photorealism and expressionism efface one another, deepening the inaccessibility of the subject. The marks of Paul Klee,Gerhard Richter, and Anslem Kieferare here. These portraits of the unknown and abandoned, humble when first noticed, menace the show with an accusing factuality. They are real; they cannot be denied. The combined power of these images–large and small, cliche and obscure, religious and economic, reproduced and handcrafted, steeped in multiple artistic traditions sometimes in conflict with one another–both stills and overwhelms. Neely has created a space of sideways humor and sincere reverence, of threat and peace.

In “Iconic”, Neely offers an encounter with the sacred, that beauty and power within us all, evident in the saints and heroes and lost ones we revere; and the smoldering question it requires all of us to answer: what will become of it in us? 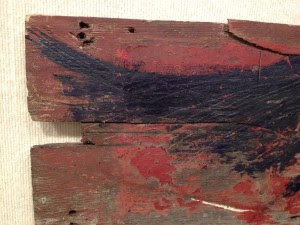 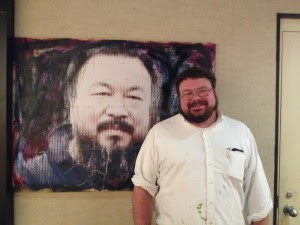 The hero-artist: Ai Weiwei and Neely

Interview with Jamarcus Gaston about Iconic:
http://www.carolinascw.com/story/26449212/artist-kristopher-neely-takes-on-iconic-faces-in-new-exhibit
Posted by Kris at 2:49 AM No comments:

Kristofer M. Neely combines his affection for found objects, street and outsider art, and altered images in this exploration of the sacred and secular in contemporary culture.

Professor Neely serves as Assistant Professor and Coordinator for Studio Art at Wofford. A Brother in the monastic Order of St. Edward the Confessor, Neely has long considered his art making to be a manual act of contemplative prayer.

This is the link to my interview with Fox Carolina before the July Art Walk.
I tell the story about the Guardians I paint.
http://www.foxcarolina.com/video?autoStart=true&topVideoCatNo=default&clipId=10375751
Posted by Kris at 5:51 PM No comments:

No News is Good News?

It is often said that no news is good news.
However, that is probably not the best policy on a blog page!


Kris worked on several projects this Spring including: 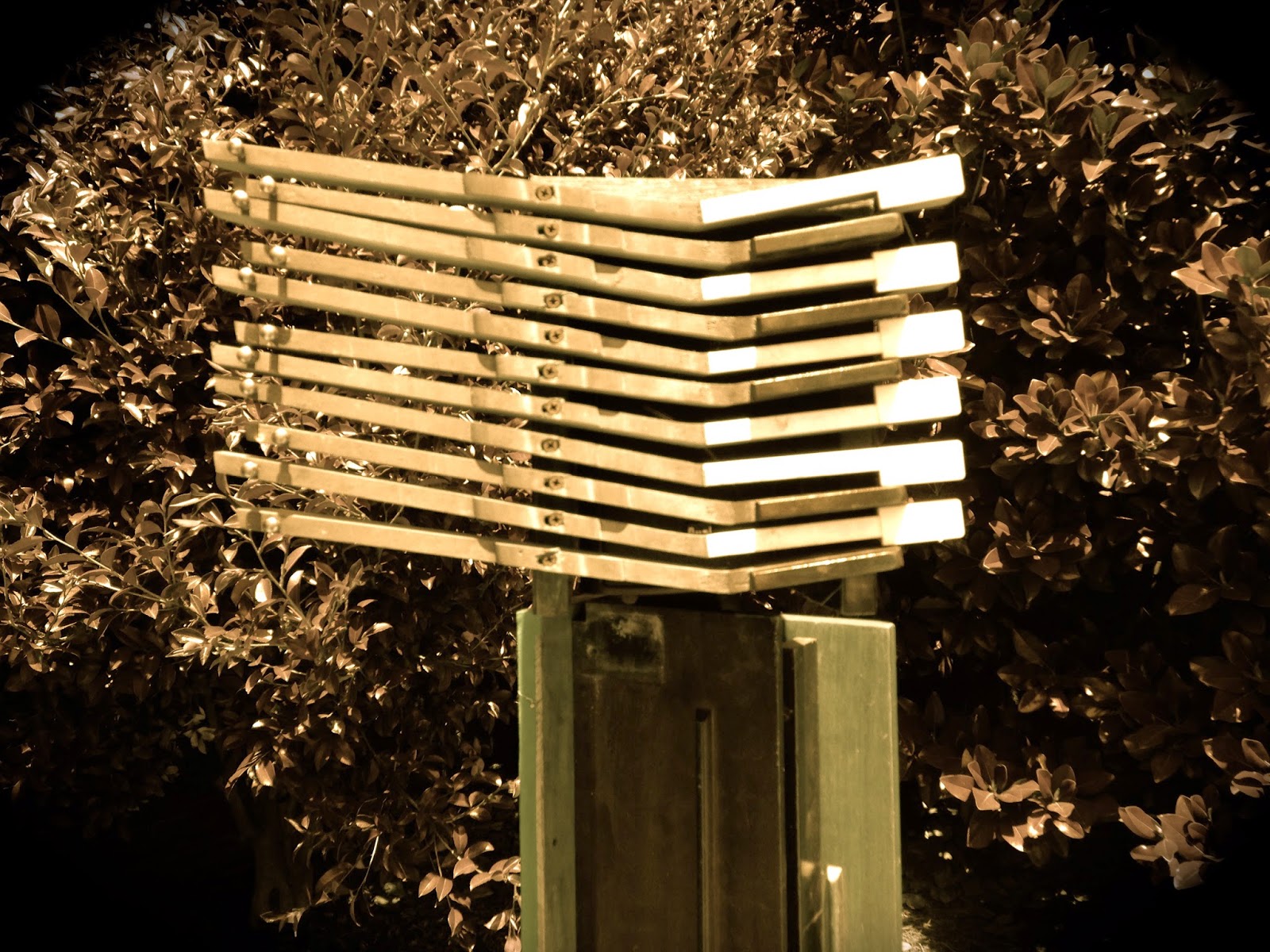 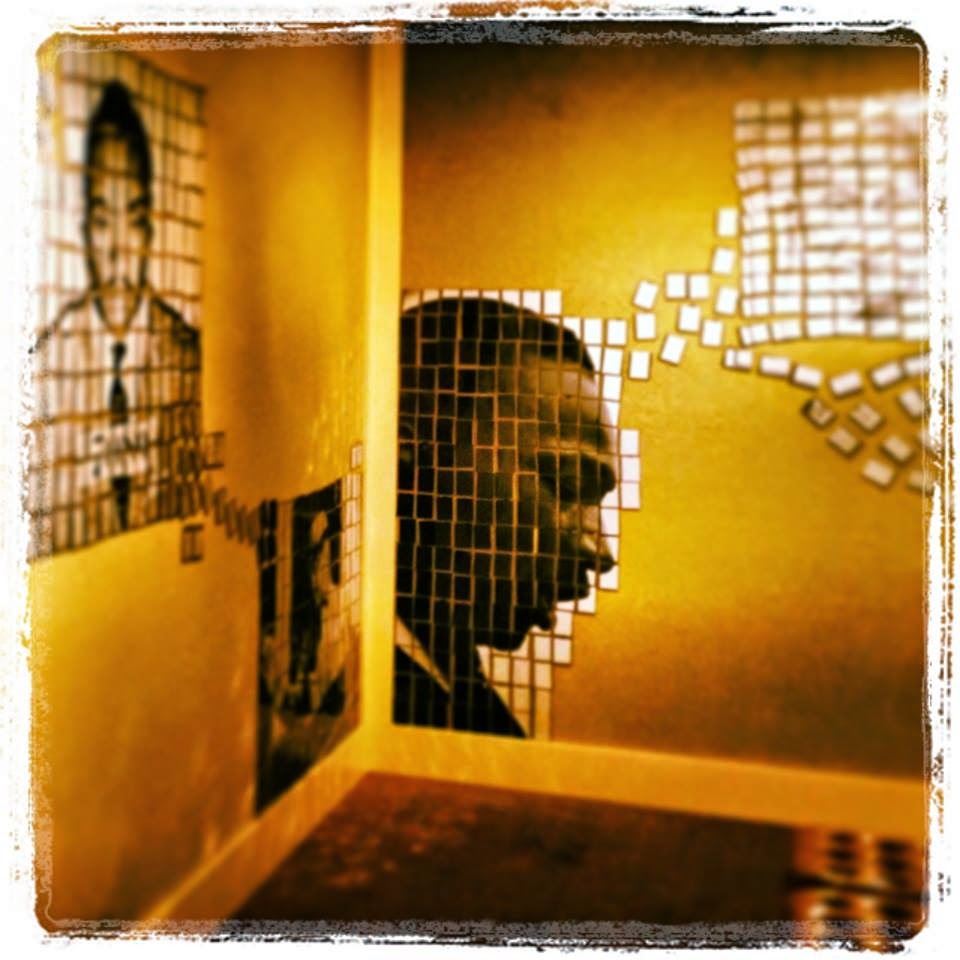 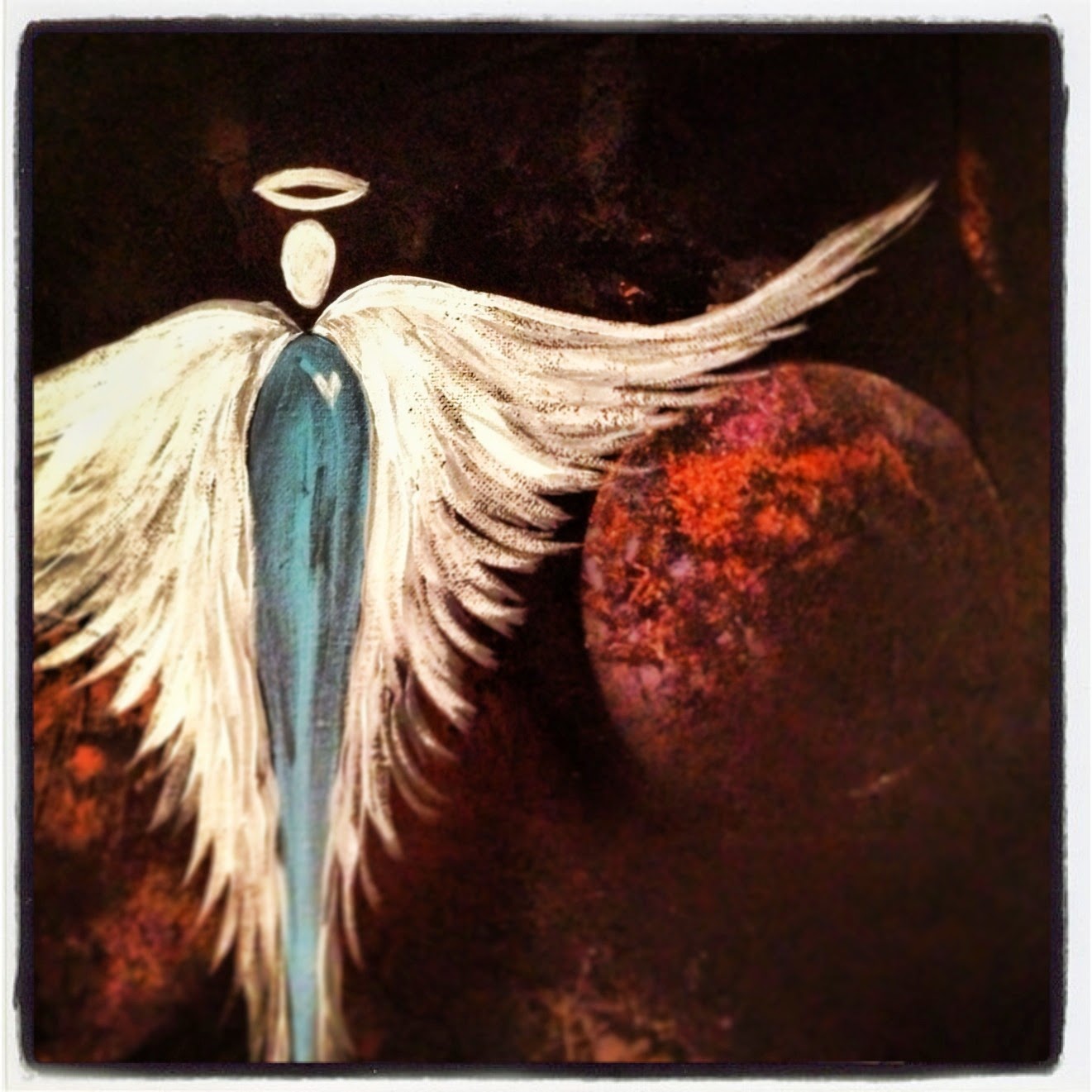 Dwell With Us: New Guardians by Kris Neely