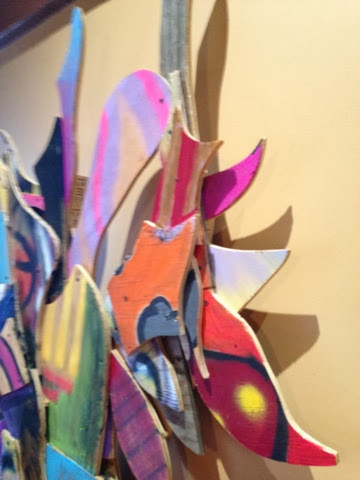 Dad's version of the story

A little less than a month ago I was involved in an accident that was, by most assessments, a close call. Though I have a separated shoulder, the outcome could have been much worse. Our sons, Scott and Kris got news of the accident immediately. Scott received a cell phone call and met me in the emergency room. Kris got word via text message while he was teaching a studio art class at Wofford. Not wanting to disturb his students as they worked on projects of their own, Kris selected a large board and quietly began painting one of his signature Guardians for me.

As I understand it, this painting was an act of prayer. If you have seen Kris’s guardians, you know that they are graceful figures with wings folded at their sides. The spontaneous version rendered as a prayer for me was different. This was an angel in flight with wings outstretched like a magnificent condor or a majestic eagle. Since it was painted with me in mind, Kris may have been thinking of a buzzard.

After his class, Kris came to the hospital to drive me back home from the emergency room. While I was still under the influence of morphine, Kris helped Clare settle me in at our home. Then he brought the angel inside and presented it as a gift. I was less than responsive but Clare expressed deep gratitude for both of us.

The truth is that there are some situations where a calm angel with folded wings is exactly what we need. But there are also those times when we need a big hunking angel actively flying about offering protection to us.

When I was restored to my senses the scripture that came to my mine was a Psalm that depicts God as a large mother bird, an eagle perhaps. The verse is from the same Psalm that mentions guardian angels. Verse 4 reads:

He will cover you with his feathers,

and under his wings you will find refuge.

Clare wanted Kris’s new angel close by our front door, so there it will be. The Biblical passage that came to her mind was Psalm 121, especially the line that reads “He guards your going out, and your coming in.” Clare calls this new guardian the going out and coming in angel. Of course, it must be by the front door.

I read Psalm 121 in several translations. I prefer the paraphrase by Eugene Peterson, The Message, because in just two verses the word guard is used five times.

God guards you from every evil,

He guards your very life.

He guards you when you leave and when you return,

As you might imagine, Kris has a new line of guardians. These have outstretched wings.

Through the years, Clare and I have felt that our children were a blessing from God. That has been reaffirmed in this situation. Not only have Scott and Kris, who live here in Spartanburg, been helpful, so, too, have our children who are away from us in other states.

Someone recently asked Scott if it was difficult to live in the same town with us. His answer was sheer genius. “Mom and Dad behave themselves pretty well. I sometimes remind them that their children, especially those here in town, will be the ones who chose their nursing home and push their wheel chair.”

Scott and Kris are currently having an art show together. The show is entitled “All Souls.” From now until October 25 you can see their work exhibited at

Next Thursday, October 24, 2013, you are invited to attend their reception from 6:00 PM until 10:30 PM. The event is sponsored by Carri Bass Photography. The Bijou Gallery is directly across Main Street from Smith’s Durgs Store #1

The description of the show sounds absolutely fascinating to me. Get this:

In their joint exhibition “All Souls”, brothers Kris and Scott Neely fill the Bijou Gallery in downtown Spartanburg, SC with spiritual images. Developing his Guardian motif, Kris Neely presents large wood assemblages in angelic form. The aerial playfulness of his constructions overcomes the weight of their material composition. In contrast, Scott Neely’s minimalist paper installations lightly balance on the gallery surface. His repetition of simple patterns evokes the steady discipline of meditation. Paired with the Neely brothers’ work, photographer Carri Bass shares pictures of the female body in honor of Breast Cancer Awareness Month. Intimate and bold, her photos draw together the opposite forces of the show, focusing both the physical power of Kris’s paintings and the exposed delicacy of Scott’s, to communicate the strength and vulnerability of all souls.

I hope you will consider joining us next Thursday evening. It will be a wonderful opportunity to purchase Christmas gifts ahead of the rush. Clare and I will be there. We would enjoy meeting you there.

Please join us for the Art Walk!
http://spartanburgartwalk.com/